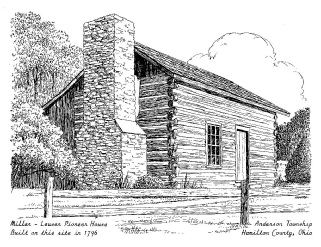 The purpose of the room is to demonstrate the evolution of Anderson Township from pre-historic times to the present.  The room includes one of the oldest reminders of the Township’s farming and pioneer heritage.  This reminder is a portion of the corn crib that was salvaged from a structure that was constructed in the early 1800’s and  later moved to the corner of Ohio 32 and Clough Pike.

Panels guide the visitor from the Paleo-Indian occupation (14,000 B.C. - 8,000 B.C.) thru later native American occupation periods to modern times.  The visitor can view photographs and displays that trace the early settlement of eastern immigrants from about 1790.  Old photographs and objects display township life in the 19th and 20th century.

Docent volunteers from the Society typically host open hours at the History Room on Sunday and Wednesday afternoons, 1 to 4 p.m., and on Thursday evenings, during Party on the Plaza till 8:30 p.m..  The History Room is currently closed until further notice due to the Pandemic. The History Room is in the Lower Atrium of the Anderson Center @ 7850 Five Mile Road, Cincinnati, Ohio. 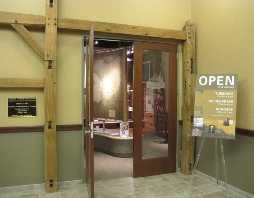 1903 - An electric IRT car (Interurban Railway and Terminal Co., eastern line) stopped at Kellogg and Eight Mile. Note the motorman at the controls; the conductor posed on the rear platform. The passenger section is filled. Two fellows are in the forward or baggage compartment, probably smoking. The oval window marks the toilet room.  From Stephen Smalley’s IRT brochure, 1972.

About 1923 - The Emerson Ayer Ford Agency, founded about 1916 at Forestville, what is now 7636 Beechmont, northwest corner with Wolfangel Road. This was the one of the first, perhaps the first, car dealership in Anderson Township. L to R: John Riggs, Gene Boggs, Hazel Johnson, Art Turton, George Glaub, Walter Ayer, Lloyd Bridges, Wilbur Wolfangel and Red Hardy.

We hope you will enjoy the special photo exhibit: Trains in Anderson from the collections of the Anderson Township Historical Society. 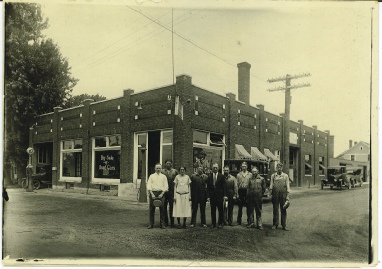 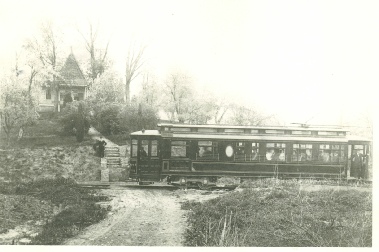